According to ANSA, she is expected to appear in person to accept her award at the Capri, Hollywood Awards ceremony on December 27.

The “Capri, Hollywood” panel also selected “The Passion of the Christ” to receive two other awards, Best Film of 2004 and Best Costumes. 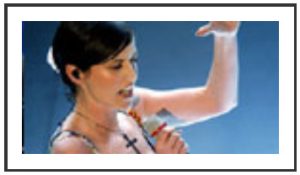 Dolores O’Riordan may soon be adding another award win to her resume. She has been nominated for an award presented by The Capri Film Festival, held during the month of December on the island of Capri, most famous of Italy’s Mediterranean islands. Nominated for her recording of Ave Maria for Mel Gibson’s blockbuster smash, The Passion of The Christ, Dolores could take home a shiny new note of recognition at the end of this month. Her nomination was no doubt aided by a stunning live performance of “Ave Maria” as the grand finale to Italy’s Sanremo Festivalearlier this year.

No word yet if Dolores will actually attend the festival, which begins on December 27.