You are here: Cran World » The Cranberries » Dolores on “I Love the 90s Part Deux”

Dolores on “I Love the 90s Part Deux”

VH1 cuts up celebrity interview clips and distributes them throughout every episode in the series, so we’ll see more of Dolores in the upcoming episodes, which debut every night this week. We will update this news page with her other appearences in the series, stay tuned…..

Don’t forget that there will be a special segment on The Cranberries’ “Zombie” in the 1994 episode which premieres Wednesday night at 10 PM EST. For the rest of the episodes, check the VH1 Schedule.

Click here to download a compilation of all of Dolores’s appearances of “I Love the 90s Part Deux” (DivX 5.2.1, 37mb)
(LINK NO LONGER AVAILABLE)

1990 Episode
Other celebrities comment on how ugly the Rugrats babies are. Dolores pipes in that they have “massive heads, completely… BLAH!” When she says “BLAH,” VH1 uses an effect to stretch Dolores’s head to double its normal size.

1991 Episode
Dolores appears twice in the MTV Unplugged segment. At first, she says, “It’s great because it just makes you think about the music and not the style or the image.” A minute later, she says in a second clip, “The one that stuck out to me was the Nirvana one.”

1993 Episode
Dolores sings a line of Radiohead’s “Creep”: “I don’t belong here.” She then adds, “But we’re all creeps really, aren’t we?” Later, she announces the title of the movie Leprichaun and narrates that the leprichauns are are all “obsessed with money, money, money, money… uwaa!” while making her scariest possible face.

1994 Episode
The Cranberries get their own 3-minute spotlight. Several celebrities express their love (or hate) of the band. Comedianne Rachel Harris admits, “The Cranberries were an interesting band. I have to be honest, the reason that I found them interesting was the name Cranberries was weird. Cranberries: happy, red, juicy cranberries! They should have been called The Olives because that’s a little more robust and subtle.”

“I kind of was a little bit of a fan when they came out. She was kind of cute,” says Lit’s guitarist Jeremy Popoff.

“There’s something about those Irish female singers that just…. I’m going to say ‘raises my cockles,’ but I think you know what I’m saying when I say ‘cockles,'” jokes comedian Michael Ian Black.

Asked if he can imitate Dolores O’Riordan’s trademark yodel, Jamie Cullum responds, “I can’t really imitate it. I’d need someone to grab hold of my testicles to make it happen properly.”

But Dolores gets a chance to defend her yodel: “I didn’t think it was cool, but I just knew it was kind of different.”

Then several commentators try to sing the chorus of “Zombie,” with everyone except early 90s act Nelson falling flat on their face. (Though Nelson does an admirable job, in my opinion.)

1998 Episode
Dolores sings a line of Alanis Morisette’s “Thank You”: “Thank you silence.” In a segment about rave music, VH1 samples Dolores saying “boom” and makes a quick all-vocal dance beat (eerily similar to Björk’s new single “Triumph of a Heart.”). She then says, “I think you have to take something to get this music” with a knowing grin.

Thanks to several ZG’ers for the tip! 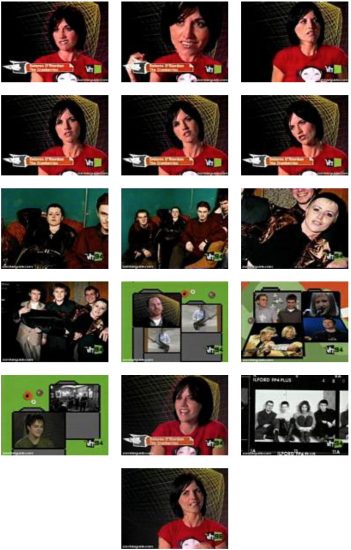