August 10, 2005  |  Comments Off on First Print Article to Reference “The Cranberries” Surfaces  |  by Zombieguide Archives  |  The Cranberries

Original Cranberry Saw Us lead singer Niall Quinn has discovered what he believes to be the first printed reference to “The Cranberries,” the shortened moniker that The Cranberry Saw Us adopted after the addition of a certain member named Dolores O’Riordan. 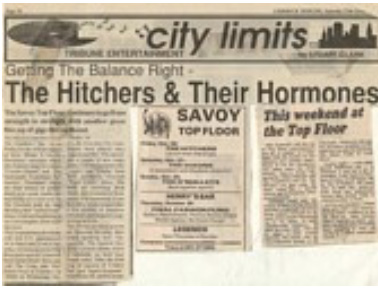 issue of “City Limits,” a section from the Limerick Tribune. The third paragraph in “Getting the Balance Right”

describes the swelling praise for Water Circle, The Cranberry Saw Us’s first demo with Dolores. The article was written by Stuart Clark, who is now Assistant Editor for Hot Press

This is “one of the first newspaper clippings about the Cranberries,” Niall Quinn told Zombieguide today, “and I’d say it actually IS the first time they’re referred to as ‘The Cranberries’ in print as opposed to ‘TCSU’ – a name they’d still have been going by at that point and I’m guessing for another few months. We used just refer to them as The Cranberries for short –like we’d refer to They Do It With Mirrors as The Mirrors.”

The article also describes further sessions at Xeric Studios which were released as Nothing Left At All, the band’s second demo with Dolores in 1990.” The songs that they were going in to Xeric to record would be “Nothing Left At All” and the other tracks from that same cassingle which came out around Christmas (still under the name TCSU),” Niall said.

Niall has previously posted more Hitchers and early Cranberries-relatedarticles on the Hitchers website.

Update:
Niall has uncovered an even earlier Cranberries reference from August 1990, two months previous to the prior October 1990 article. The article appeared in the now defunct Limerick Tribune by the now renowned Hot Press editor Stewart Clark.

Niall writes, “The article appeared in The Limerick tribune (long gone) and was again written by Stuart Clark who’s interviewed the band many times and is a nationally renowned journalist and commentator here in Ireland now. 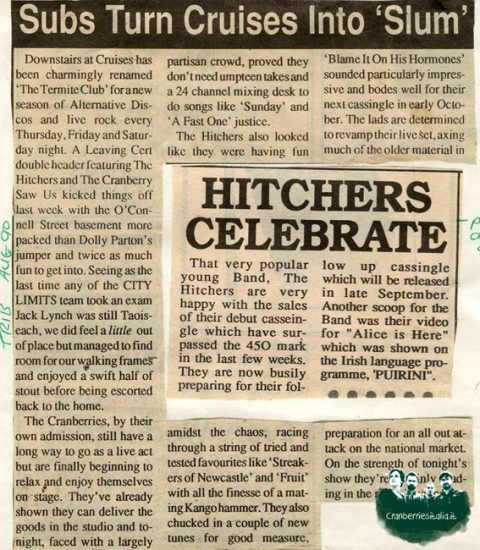 “I remember this gig quite well as some of the older lads in The Hitchers would’ve have got their Leaving Cert (High School final exams) results that day and were pretty pissed drunk by the time it came for The Hitchers to play. So that puts it in and around the 3rd Wednesday in august as that’s when these results are always released.

“Incidently, the ‘Termite Club’ referred to is STILL GOING here in Limerick 15 years later. It’s moved home several times but is still the place the indie kids head for on a Friday or Saturday night.”

Thanks to Niall Quinn for the scan and info.