You are here: Cran World » Dolores O'Riordan » Interview: New band is like “having a new boyfriend”

Interview: New band is like “having a new boyfriend”

February 22, 2007  |  Comments Off on Interview: New band is like “having a new boyfriend”  |  by Zombieguide Archives  |  Dolores O'Riordan 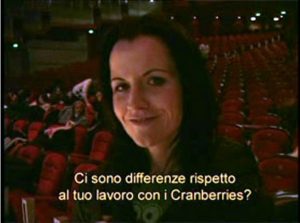 In an interview recorded during the soundcheck for December’s Monte Carlo Christmas Concert, Dolores O’Riordan told Italian website Music Box that having a new band to back her solo career is like having “a new boyfriend” (!)

Cranberries-fan has posted DivX videos of a very brief interview done for the Italian-based Music Box service. There are also clips of Dolores’s soundcheck of “Away in a Manger.”

Dolores, who sounds a bit under the weather in the video, said, “It’s really quite di erent [from The Cranberries]. It’s more experimental, I suppose. The whole idea was to do something di erent, try di erent things… so hopefully you’ll enjoy it.”

How does Dolores feel about being a solo artist? “It’s cool. It’s not that much di erent — you’ve still got a band playing. It’s exciting, it’s just a new experience. It’s like a new boyfriend or something.”