You are here: Cran World » Dolores O'Riordan » Weekend Mail: AYL? one of the best albums of ‘07

Weekend Mail: AYL? one of the best albums of ‘07

The April 21st issue of the Weekend Mail (a publication of Malaysia’s New Straits Times) has nothing but praise for Dolores O’Riordan’s forthcoming new album, calling it “one of the better albums to be released this year.” 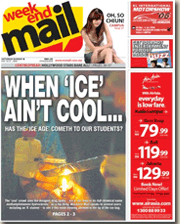 Here’s what they had to say:

Dolores O’Riordan
Are You Listening (Sanctuary Records/Import)
Release date: May 15, 2007
FROM the first listen, it seems like
the debut solo album by former the Cranberries frontwoman is going to be one of the better albums to be released this year. The first single, Ordinary harks back to her Cranberries’ days but that’s about it, apart from her of course distinctive voice. As a whole, the album moves along the same lines as Siouxsie and the Banshees and Sinead O’Connor – during their peak – while lyrically, this could be her most personal album to date. Songs like the first single, Black Widow and Apple Of My Eye ought to be a testament.