Dolores O’Riordan’s performance and interview from last week on Ireland’s “Late Late Show” is now posted on the RTE website. 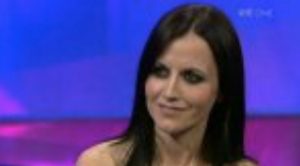 Dolores O’Riordan is an icon of modern music. As lead singer of The Cranberries she has sold a massive 45 million records. Tonight on The Late Late Show Dolores launched her solo career and her debut solo album “Are You Listening?” Dolores performed her new single “Ordinary Day” and spoke to Pat about fame at a young age, performing for two popes and a whole lot more besides.

The clip is pretty long at 17 minutes, and includes some great interview bits, including Dolores describing the time when she got to sit on Luciano Pavarotti’s lap a la Santa Clause.