On May 25, The Sydney Morning Herald newspaper, published an article about Dolores Oriordan’s comeback with an exclusive picture. Screencaps of the printed version were posted on the forums. 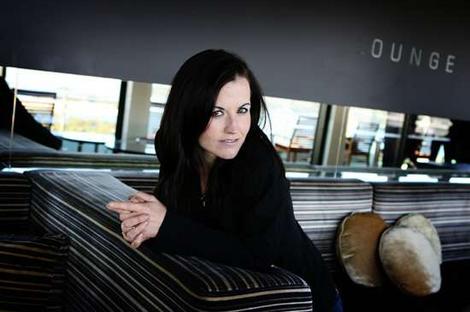 For Cranberry’s new drive comes to fruition
“I want to keep my identity” … the former lead singer of the Cranberries, Dolores O’Riordan, has released a new album, Are You Listening? , and will begin touring again this year.
THERE was a time in the mid-1990s when hearing Dolores O’Riordan was unavoidable.
Her voice was everywhere, on the radio and in shopping centres singing and shrieking songs such as Linger and Zombie, which she wrote and performed with the Irish mega-group The Cranberries. Then, in 1996, O’Riordan had a nervous breakdown and the band, after selling 40 million albums, began to disintegrate, breaking up three years ago.
O’Riordan, 35, is now a mother of three who knits and practises yoga. The shaved head has been replaced by long dark locks.
“I don’t find much pressure in motherhood; I love being a mother,” O’Riordan said, in Sydney yesterday to promote her new solo album, Are You Listening? “It was more challenging growing up in the public eye – the fishbowl syndrome. My first son was born 10 years ago. Giving birth helped me to heal and helped me to open up and receive love.”
With such an idyllic domestic life, it seems di cult to believe O’Riordan would consider returning to the lifestyle that sent her over the brink.
Many of her songs are dedicated to family members: her children and her Canadian husband, Don Burton, the former tour manager for Duran Duran whom she met at age 19 while touring the US and married in 1994.
This year O’Riordan begins touring again, including Australia in October, but insists it will be with a di erent mindset. “I have been a singer and an entertainer longer than I have been a mother, and it is a big part of my identity. I want to keep my identity.
“In the four years I was at home, writing became a hobby, and that was lovely. When you are not trying and you are not stuck in a contract and you don’t think people are waiting, suddenly you get great inspiration.”
O’Riordan rarely smiles but admits it is a long way from the days when paralysis set in before going on stage with the band.
“There is no real pressure. Pressure is something we place on ourselves. When you are young you make mistakes – you sign yourself away for two or three years. It is hard to back off then.”

Thanks to gasjetter for the article images and OldieFreshGyal for finding the online article.