Dolores O’Riordan is on the cover of the June 13th issue of the American edition of the Irish Examiner, plus the full interview is online at their site. (LINK NO LONGER AVAILABLE) 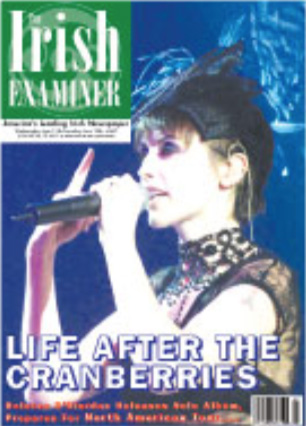 Here are some good quotes pulled from the interview:

“I’d a good break, and I’ve the hunger back, the whole vibe is back. Most of the material (for the new album) was written in Canada. In winter, there’s four feet of snow there. It’s very cold, but very inspiring. I have a piano in my house, and I use the weather, the ever-changing climate to inspire me while writing,” she claimed.

The music scene in general however, has changed a great deal while she’s been away. “The emphasis is not on CDs anymore, it’s more on Ipods. It’s always changing, when we were teens, it went from vinyl to cassette. Good music is good music though.”

Dolores, discussing her cameo in Click, also revealed that she isn’t as interested in acting now as she was just a few years ago. (”I want to play some kind of femme fatale – curly hair, big breasts and a tight dress. I imagine it would be like ‘Hollywood! I’m here – Dolores O’Riordan in person!’” she said in 2002.)

Of her cinematic venture, she told us: “Adam (Sandler) is a big fan apparently. It was a blast, we spent ten days (on location). There’s a lot of waiting around for your scene. It’s a good laugh, and very interesting behind the scenes. Every morning, we’d three and a half hours doing make up, it makes you aware of so many different forms of art.”

Of a future in acting however, she said: “Maybe when I’m older, if it felt good at the time. I did like the whole experience, but you’d have to move lock, stock and barrel to Los Angeles.”

It looks like back issues of the cover article may be available for ordering. We’ve emailed the Irish Examiner about it and will update if you can order online.

Lastly, the Irish Examiner has some juicy circa 2000-2002 hi-res photos that you obsessive picture collectors can grab here and here.

Read the whole article here or below, after the jump. (LINK NO LONGER AVAILABLE)