You are here: Cran World » The Cranberries » Take 2: 1993 Fanning session to air on December 7th

After airing the 1991 Dave Fanning session last October, RTÉ radio host Dan Hegarty does it again and brings back from the vault another fan favorite, the other Fanning session, which could include rare tracks “Like You Used To” to and “False”.

“By popular demand (or perhaps gentle persuasion) Dan brings you The Cranberries Fanning Session from 1993“, says the description on Hegarty’s RTÉ blog. Back in October, a confusion on Dan’s blog about the 1991 and 1993 sessions caused quite a commotion in the fan community, who initially thought that they would get a chance to listen to the 1993 session for the first time in 18 years. Hegarty then saved the day by telling the fans he would do his best to find the 1993 session and broadcast it in a near future.

During an interview with Dave Fanning few days before the original 1993 broadcast, singer Dolores O’Riordan and drummer Fergal Lawler explained that they were recording a new version of “Wanted” for that session, plus three new songs. It is likely that those songs are “False”, “Like You Used To” and “The Icicle Melts”. The latter was recorded again a year after for the band’s second album “No Need to Argue”, while the first two were never commercially released.

Be sure to tune in to Dan Hegarty’s show on RTÉ 2fm (not Dave Fanning’s show), next Wednesday night (December 7th) at 11 p.m. (Ireland time). 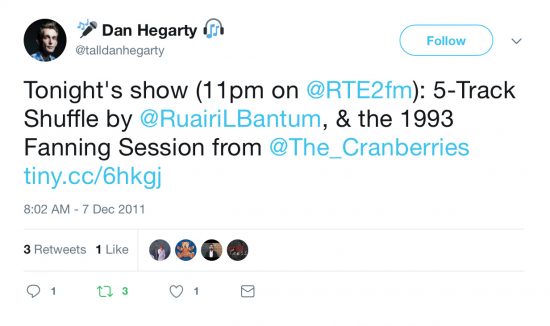 In the meantime, you can listen to the complete 1991 session on the Fanning Sessions Archive website.

Thanks again to Dan Hegarty! Cheers!!
And thanks to Jury for coming up with this breaking news.