The Cranberries to promote “Roses” in the U.S. in February

The Cranberries will be in North America next February to promote the release of their upcoming “Roses” album, according to a message on their Twitter account. 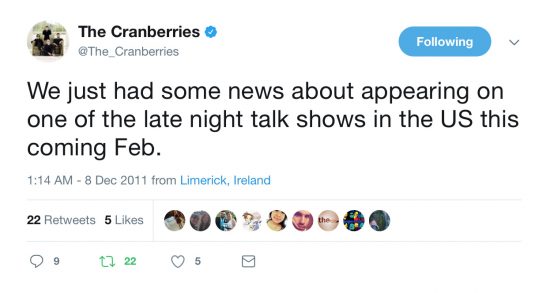 “We just had some news about appearing on one of the late night talk shows in the US this coming Feb.” So who is going to welcome back The Cranberries on American national television? Leno, Letterman, Fallon, O’Brien? We’ll have to wait and see.

It is likely that the band will visit other media (TV, radio, press) in the U.S.A. and Canada during this period. All the details will be posted in the “Promo Tour” section when they will be made available.

The European media tour might also be planned for January.

Roses will be released on Feb.13 in Europe and Feb.14 in North America. The World tour will start in March in Australia.