Following Bruxelles concert, last week was affected by a cancellation in Amsterdam: the show that was due to take place at Koninklijk Theater had to be postponed in the afternoon after Dolores was diagnosed as ill with a heavy cold and related symptoms. The show will be rescheduled on June 16th at RAI theater.
Let’s note some fans got to meet Dolores on that day at the venue, as you can see on the below video in which she explains she’s got a virus:

It seems the cancellation was a wise decision as it turned out Dolores was able to come back on stage on Friday 12th in Lille. As often, the audience in Northern France did not disappoint and was, as expected, one of the loudest on the tour so far, enhancing the show and leading Dolores to speak a lot in French in between songs as she used to in the old days, letting the audience know “vous êtes le mieux” (you are the best) several times. She used the occasion to thank the crowd for their singalong and explain she had a “croaky voice” because she was sick, though she nonetheless managed to deliver an impressive performance, especially on the three new acoustic songs, with alternative lyrics on Why. 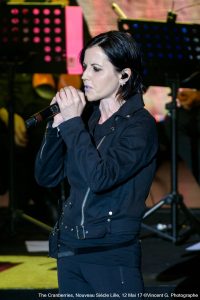 Same for the following crowded Paris show that took place on Saturday 13th, where the audience however got to hear a regular version of Why. One may note that the violinists were the same as on the first Paris play. Taking the situation into account, no surprise, the setlist remained unchanged for both these shows, though we may witness some changes once Dolores will be feeling better on the tour.
Like all shows so far on this “acoustic tour”, these two were sold out. 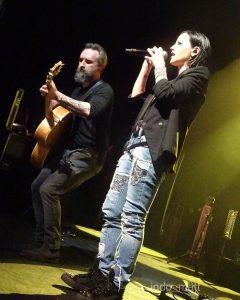 Here’s a cool pic of Dolores arriving at the Olympia in Paris in the afternoon (thanks to Danny and JeJe): 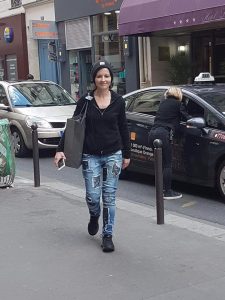 Below, our usual vids taken during the shows, please note that people in the stalls were not allowed to film AT ALL in Lille – and security guys took it very seriously – which explains why we don’t have any vid of The Cranberries on that date. However security was taking it easier during the D.A.R.K. Live PA performance so you can watch one of their songs below: