You are here: Cran World » The Cranberries » Second European promoter to confirm full cancelation of the acoustic European shows

June 16, 2017  |  Comments Off on Second European promoter to confirm full cancelation of the acoustic European shows  |  by Webmaster  |  The Cranberries

For those who have missed our post on Wednesday, French fans who had bought tickets for the shows in May and June that were to be postponed in the upcoming months received an email two days ago from French promoter -GDP- to inform them these shows “could not be rescheduled in the end“

UK, Spanish, Italian, Swiss, and Dutch promoters had not given any news on their side yet, though Ticketmaster.nl just sent customers who were owning tickets for the show due to take place tonight at RAI the below email (screen captured): 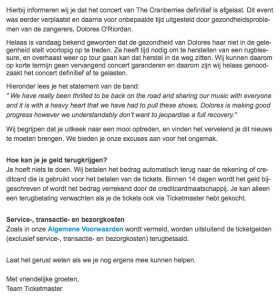 None of our team members at Cranberries World can speak Dutch language though here’s an approximate translation made through Google:

We hereby inform you that the The Cranberries concert has been definitively canceled. As you may know, this even was already rescheduled once to a different venue before it got postponed indefinitely due to singer Dolores O’Riordan’s health issues.

Unfortunately, today, Dolores health does not allow her to be back on stage to perform (CW note: we’re not quite sure of the translation here). She needs time to recover from a back injury, and going back on tour prematurely could bring back the medical issues. Therefore, we can not guarantee to reschedule the concert in the short term and thus do not have any other choice but to cancel the show.

Below you can read the statement of the band:
“We have really been thrilled to be back on the road and sharing our music with everyone and it’s with a heavy heart that we have had to pull these shows. Dolores is making good progress though we understandably do not want to jeopardise a full recovery. “

We understand that you were looking forward to a nice performance, and we’re really annoyed to bring this news. We apologize for any inconvenience.

How can you get your money back?
You do not have to do anything. We will automatically refund the amount to the bill or credit card used to pay for the tickets. Within 14 days, the money will be credited by the credit card company. You can only expect a refund if you have purchased the tickets through Ticketmaster.

This new pieces of information are quite worrying and may imply that some more dates could be cancelled in the upcoming days. Indeed, the band is expected to play four electric shows in Italy next week to start their European summer festivals tour. It now looks very unlikely that these shows will take place.

We’ll keep you updated as soon as we know more on Dolores’ current state and if the situation is to impact -or not- the other European dates starting on July 29th in Norway up to August 13th in Orange, France.