You are here: Cran World » The Cranberries » Dolores O’ Riordan: ‘You have to be strong’. Interview on The Business Post Magazine

Dolores O’ Riordan: ‘You have to be strong’. Interview on The Business Post Magazine

Journalist Nadine O’Reagan met the band back in April in a Dublin pub. The interview was then published in the Business Post Magazine issued on May 7th which featured Dolores O’Riordan on the cover (“She’s beautiful, Dolores O’Riordan. Sometimes the cameras don’t capture that. Today, as she sits in the Cobblestone pub in Smithfield in Dublin, the Limerick-born singer looks as dainty as a doll – her skin is porcelain, her close-cropped hair is a shiny black, and her military-style jacket from Marc Jacobs in Brown Thomas is on trend: tough, but also reinforcing her fragility”): 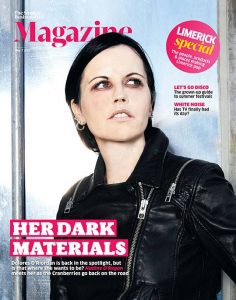 “You have to keep going,” O’Riordan nods. “You just have to be strong. And keep soldiering on. You just can’t lay down and die. There’s light at the end of the tunnel.”

Noel, Dolores, Fergal and Mike sat down to discuss various topics ranging from their early days and sudden fame to hobbies. Here are a few extracts (full interview is avaiable on the Business Post site – subscription required):

About the early days:

“For us, four kids from Limerick, who did a demo, took a chance and posted it to London – for us to get a positive letter, we were ringing each other, going: ‘Oh my God’,” says Lawlor, the gregarious drummer, as he sips a soft drink around the small table in the Cobblestone. “You have that buzz. Geoff [Travis, the founder of Rough Trade Records] was managing us a year later.”

“We found that, for us, any problems have come from outside influences,” Hogan says, adding that it’s better when he and O’Riordan sit down and “thrash out” issues.

O’Riordan enjoys swimming and meditating – she’s not into Spotify; she’s not much of a music listener by her own account, but she downloads meditations from iTunes. She travels with a yoga mat, she says, and she’ll meditate every day if the hotel room she’s in has space for her to lay out her mat. I ask her why she likes meditating so much, in particular.

Dolores also gave an insight on her back injury that would later prevent her from completing their summer tour:

“I love to swim (…) the breaststroke and the backstroke. Because I had a herniated disc last year. I had to cancel a couple of festivals. I’m hoping it doesn’t come back to haunt me. If I had this disc out, I’d have to be in a wheelchair, so that would be bad. I also like walking and painting”

The journalist also talks about Something Else defining it “gentle, uplifting and worth hearing”

One Response to Dolores O’ Riordan: ‘You have to be strong’. Interview on The Business Post Magazine