We’re lacking words to describe what we wish we had never seen.
Here’s a few articles describing the first day of mourning:

O’Riordan’s mother Eileen and her six siblings accompanied her dark wooden coffin into St Joseph’s Church, which was decorated with white roses, photographs of the deeply religious star performing on stage, and of her two separate meetings with the late Pope John Paul II at the Vatican.

Bishop of Limerick Brendan Leahy said: “It was very moving to be here, to see the generosity of Dolores’ mother Eileen and other family members, not alone in providing this opportunity ahead of the funeral for the public to pay their respects, but for being there also.”

Bishop Leahy said: “In blessing the remains of Dolores O’Riordan here in St. Joseph’s Church in Limerick today, I am conscious that, while millions across the world have been shocked by the sad news of her death, today is Limerick’s public moment to bid farewell.

“We come to offer a heartfelt greeting to a deeply loved and cherished daughter of Limerick, a talented representative of the potential of Limerick people and a convinced advocate of living life in truth, love and peace.

“As we file pass her coffin, let’s remember God’s love and mercy and pray for her, her family and those she loved and helped in life.

“Dolores appreciated the value of spirituality in our lives. She made her First Communion in this church and was confirmed here. She attended the nearby An Mhodh Scoil (Model School) and Laurel Hill Coláiste FCJ school. Her spiritual journey continued in many parts of our world, and yet Dolores remained anchored in Limerick. We can be grateful to Dolores’ family for choosing this beautiful church as a venue for her lying in repose.

“Today as the Limerick people she greatly loved come to pay their respects, let us pray for Dolores: ‘May the angels lead you into paradise; and take you to the holy city, the new and eternal Jerusalem, where there will be no more tears, no more death or pain, for the time of heavenly singing has come’.”

Some of the singer’s greatest hits played out in the church while mourners, stood in silence and remembered her in their own personal way.

Others, who were inconsolable in their grief, wept and hugged one another

A floral tribute left next to the singer’s coffin, from her Cranberries bandmates – brothers Noel and Mike Hogan and Fergal Lawlor – read: “The song has ended, but the memories linger on.” 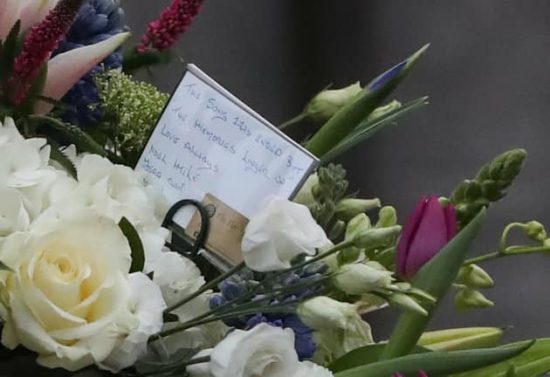 Her voice filled the building, her band’s songs softly playing in the background throughout the service, as a floral tribute beside the open coffin read: “The song has ended, but the memories linger on.” Along the walls, photos of O’Riordan were placed, including one of the singer posing with the Pope. Four books of condolence were also open for mourners to sign.

LAID out in an open casket with the motif of Our Lady at the Foot of the Cross carved into the oak at either end, a set of pearl rosary beads are threaded through the fingers of iconic rock star Dolores O’Riordan as she lies in repose at St Joseph’s Church in Limerick city this Sunday.

The body of the 46-year-old mother-of-three arrived in a hearse at the church on O’Connell Avenue at 12.10 under grey clouds.

“It’s very sad. The coffin is open – I’m not sure if people were expecting that and she looks so tiny – very peaceful, at rest,” comments Sheila Deegan, ‎Arts and Culture Officer, ‎Limerick City and County Council, on the steps of the church.

Undertakers from Cross’s Funeral Home stand vigil around red ropes which keep mourners a respectful distance from the remains of the global superstar who hailed from the small townland of Ballybricken.

Even death can’t dim the superstar quality of Dolores. A black glittery top peeps out from behind the frills of the casket’s shroud. Dark eyeshadow matches her raven hair. In front of the altar mourners bow their heads. Some say a prayer, some beat their breast, many a tear is shed.

Her coffin was carried inside accompanied by her mother and family members.

Friends and relatives carried white roses as they entered the Church.

At 1pm her mother Eileen and her six siblings left the church after spending an hour with mourners.

Mourners said silent prayers in front of the open coffin, with many shedding tears as they said their goodbyes. Others visibly broke down as the left the church.

Mourners from all over the world also gathered to pay their respects. 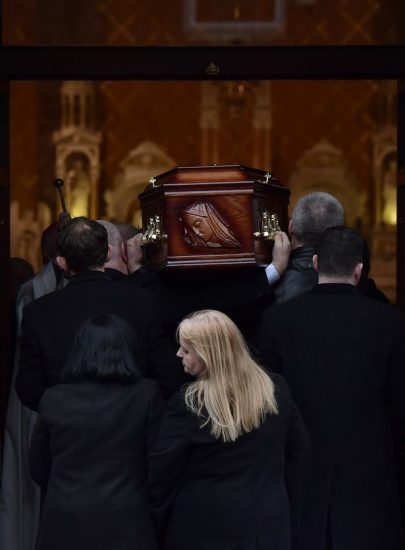 9pm RTE News shows the band carrying the coffin outside the Church, greeted with applause. 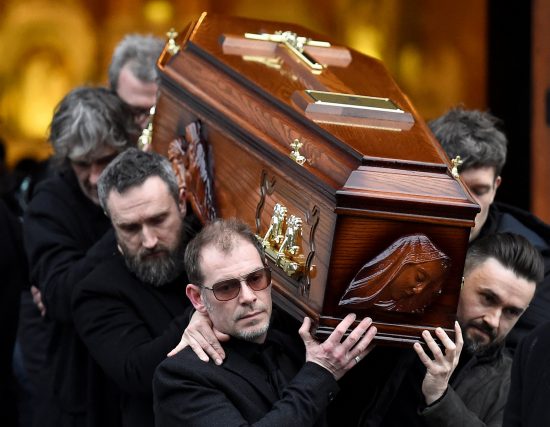 The coffin of Dolores O’Riordan, singer with the Cranberries is carried from St. Joseph’s Church after a public reposal in Limerick, Ireland January 21, 2017. REUTERS/Clodagh Kilcoyne