You are here: Cran World » The Cranberries » “Everybody Else Is Doing It…” special 25th anniversary edition album to be released later this year

The Cranberries just published on their website cranberries.com as well as their socials a new moving statement announcing that they were initially planning on releasing a special 25th anniversary of their first album “Everybody Else Is Doing It, So Why Can’t We?” this month through Universal Music.

The project has been understandably put on hold since Dolores’ passing, but the band has decided to finish what they had started with Dolores, and get this special edition out “later this year”.

This will feature remastered versions of the tracks we know, along with unreleased material and bonus material from this early 90s era of their debut album.

The band also uses the occasion to remind fans they’re planning on completing the recording of the new album which they had been working on during the past months, and for which Dolores had already recorded the vocals.

The CW Team would like to send Noel, Mike and Ferg all their love and support as we presume this won’t be easy for them.

We love you guys!
xx 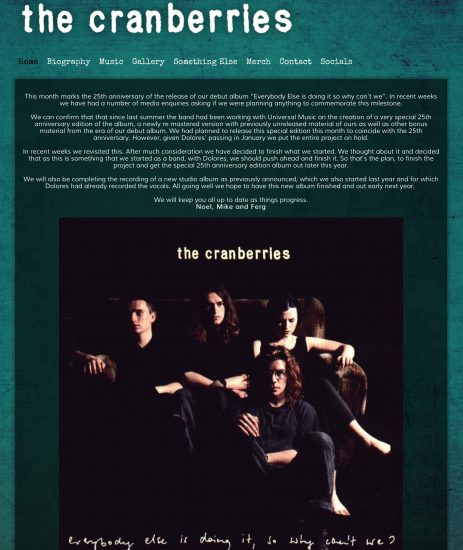