Early years rarities, episode #2 from Alan’s collection!
Following the upload of his audio recording from 1991 concert at Limerick’s Parkway last February, here’s a second gem surfacing almost 25 years after it was recorded. Again, Alan recorded this one himself on his walkman back in 1993 at Two Mile Inn, Limerick.

Alan purposely chose not to stand at the front for this recording, as opposed to The Parkway, in order to try and get a better sound; he thus stood close to the FOH mixing desk. It remains an audience recording so the quality is pretty similar to the 1991 recording. The recording features the complete show, only a few seconds before the encore are missing as Alan had to flip the cassette, but there’s no song missing. 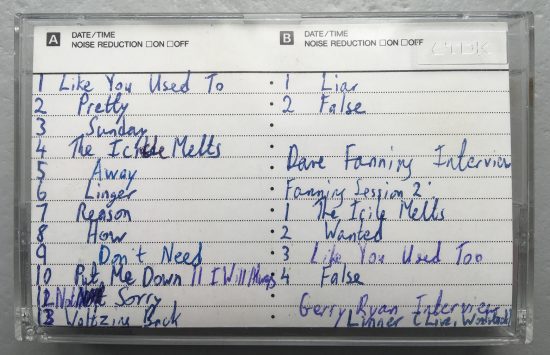 What’s particularly striking on this recording is the never heard before early version of “Zombie”. Obviously this was one of the first time (maybe the very first time?) the song was played live in concert.
Dolores introduces the track simply mentioning it is “another new song, it’s called Zombie”.
The song does sound very similar to that we know, still it features some interesting differences:
“Zombie” is actually played quite fast, kinda like a 33rpm at the 45rpm speed.
Dolores sings alternative lyrics in the 2nd verse of the song “another mothers broken heart has hardly spoken”. Also, the line “with their tanks, and their guns, and their bombs” happens to be “with your tanks, and your guns, and your bombs” at that time.
One may note that Dolores doesn’t exactly sing as she does on the album version and the words “in your head” and the ultimate “Zombie” are for instance sung very softly compared to what we’re used to.

It’s funny to note that what will turn out to become The Cranberries biggest hit was barely applauded that night. Yet, the crowd, which as you can hear was very talkative on that night, does pause to pay attention during 3 to 4 particular songs, and “Zombie” is of them; definitely a good sign 😉

Thank you Alan, everyone can now listen to the earliest live version known to this day of the masterpiece “Zombie”. (The previous earliest version of the song was the Paris radio show “The Black Sessions” recorded on 3 May 1993).

The rest of the set also includes songs which were rarely played live after 1993 like “Away”, “I don’t Need”, “Reason” or “I will always”.
Most of the other classic songs played on that night sound very close to the album versions we’re all familiar with (as opposed to The Parkway show where songs rather sound very fresh and almost like demos than the final versions), which is not too surprising as The Cranberries first album was just a few weeks old at the time.
All in all, a great boot to listen to, enjoy it!!!