Sky News is live from London where an inquest is being held, you can follow the updates on this link or on the below post. 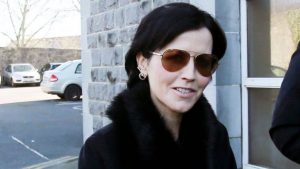 UK TIME:
10:45 AM Setting up now at Westminster Coroner’s Court ahead of the start of the inquest.

10:50 The coroner is Dr Shirley Radclffe, and the first witness we will hear from will be Stephen Earl, who will give identification and background

11:07 Dr Earl’s report will be via documentation, he will not be in court

11:08 The mother, brother and sister-in-law of Dolores O’Riordan are in the Coroner’s Court today to hear the coroner’s findings

11:09 We will later hear a report from O’Riordan’s American psychiatrist

11:13 As well as a musical star O’Riordan is described as a ‘loyal daughter’ and ‘dedicated & loving mother’

11:15 After checking in to the hotel, O’Riordan is described as accessing the mini-bar in her room and calling her mother at around 3am

11:16 O’Riordan is described as being found ‘submerged face up in the bath dressed in her pyjamas

11:17 We will now hear from PC Natalie Smart live in the court

11:18 Hotel manager had contacted the police and took PC Smart up to the room

11:19 A maid discovery O’Riordan’s body on entering the room

11:20 When police arrived O’Riordan’s nose & mouth were completely submerged in the bathwater

11:20 O’Riordan was dressed in pyjamas and a long sleeved vest

11:21 Five miniature bottles of spirits were found in O’Riordan’s room, a 35cl mini bottle of Champagne and the packaging for a quantity of medication.

11:21 A packet of cigarettes had also been smoked

11:23 A report from psychiatrist Dr Hirschfield – O’Riordan’s US psychiatrist- she had stopped drinking and seemed to be doing well, although he said she had felt a little low over Christmas

11:25 O’Riordan is described as being on a selection of prescription drugs taken for bipolar disorder

11:26 Toxicology report showed she was 4 times over legal driving limit when found

11:29 Dr Ceallaigh says he believes she had ‘an episode of mania or elevated mood’

11:31 Back in 2017, at a time of stress, after drinking excessively, O’Riordan had begun a suicide note but then lapsed into unconsciousness.

11:32 Dr Ceallaigh saw her 1 week before her death. She was due to shortly return to New York.

11:33 He says she had maintained sobriety over long periods, but he recognised her use of alcohol as a high risk factor.

11:34 There was no evidence O’Riordan had taken any drugs, other than her prescribed medication. However she had drunk excessive amounts of alcohol.

11:37 The coroner describes O’Riordan as looking forward to the future, both her music and seeing her children in Canada

11:38 Cause of death: drowning due to alcohol intoxication

11:42 The coroner offers her condolences to the family, and concludes the court session.