A week has passed since the community of Bruff, co. Limerick, came together to celebrate the birthday and life of Dolores O’Riordan, who was born and raised in the area.

Here’s our attempt at reviewing the event, as some of the CW members experienced it, starting with a video of the atmosphere in the Bruff streets, where Dolores and The Cranberries music could be heard all weekend:

The event was launched with an opening ceremony during which the Morning Star Park of Bruff, where Dolores and her mother Eileen answered Barry Egan’s questions in April 2014, was renamed “Dolores O’Riordan Park”. Former Irish rugby star John Hayes and his wife unveiled a plaque featuring Dolores O’Riordan’s name and Ordinary Day lyrics on the very bench Eileen and Dolores sat in 2014. 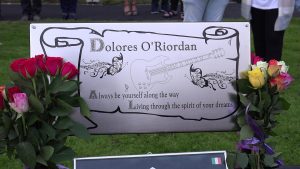 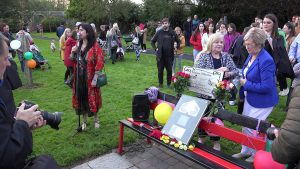 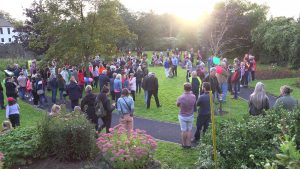 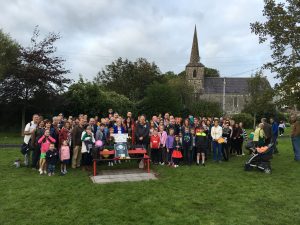 See below our video of the ceremony:

The concerts then kicked off with a performance of Dolores’ niece, Noelle O’Riordan, who performed two songs of her own (Hold You Always & Blue Skies) with Kellie Lewis – who we believe needs no introduction anymore – on keyboards before covering Zombie, a capella.

Dolores’ Voice of Ireland protege, Kellie, then took the stage to the greatest pleasure of the audience, notably performing a cover of Dreams, which you can watch below:

The street stage concerts ended with a performance of the brilliant indie rock & electronica influenced 4-piece band from Limerick, Parliament Square, who performed a full set including a cover of When You’re Gone (as well as a really cool cover of David Bowie’s China Girl – which Olé used to cover as well when opening for The Cranberries on their 2017 tour).

The night kept going from 10pm, with concerts taking place in all pubs in the village – Mary Howards’, Clarke’s (where The Acoustic Club was hosting an open mic stage every night), Derry’s and two stages at Clancy’s – making it hard to see all artists performing 😉 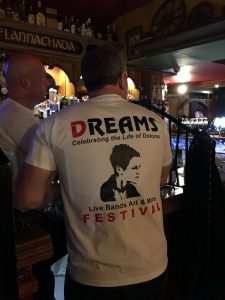 Here’s an insight on the atmosphere in the Bruff pubs, as Thick as Thieves performed Zombie on Friday night.

Saturday started with an amazing free outdoor yoga class by Eileen Sheehan Yoga for festival goers to attend in the Convent Gardens, followed by Pranic Healing, the festival being an opportunity to raise awareness for mental health and suicide prevention.
One may note that the volunteers from Limerick Suicide Watch were attending the festival, promoting positive mental health over the weekend by the Dolores O’Riordan Park in Bruff.

The festival coordinator, Julianne Hennelly, also presented fans with a wonderful opportunity to gather with her in The Kennedy Rooms’ Church for a singalong, where they could share their love and passion for Dolores & The Cranberries, singing songs such as Carry On, Linger, Dreaming My Dreams, So Cold In Ireland, Iosa, Hollywood…

Main stage concerts on that day were all live streamed on the Dreams Fest 19 facebook page, where performances from Fox Jaw, MIZDREA, The Flag Listeners, Protobaby and Theme Tune Boy are fully available to watch through these links:

Here’s our own video of Protobaby’s surprising and amazingly well rendered cover of All Over Now:

As well as an extract from the eagerly expected performance of Theme Tune Boy (feat. Niall Quinn!!!) – which we strongly encourage everyone to watch – who covered A Fast One from The Cranberry Saw Us, something fans could have easily seen coming as Niall Quinn had performed this track when taking part in the “Goodbye Dolores: The Final Episode” podcast from “Coffee With a Sign Painter” released in April 2018 (1:19:30) to say farewell and share memories and music of the Cranberries singer.

Pubs on that night happened to be so crowded for the event that it was actually hard to get in and find a spot!

Sadly, not all shows took place on the main stage on that day, as heavy rain prevented the outdoor celebrations to be able to continue after Xero’s performance.

Here’s our own video from Juli Jam’s very moving interpretation of In The End:

Before heading to pubs for a last evening of music and celebrations – with, among others, Kellie Lewis performing a full set at Derry’s, or Broken Cord and Laurence Corbett closing the night at Clancy’s – Bruff surprised everyone with a lovely fireworks display outside of Clancy’s, as everyone sang along to Dreams, such a fantastic way to end a very special weekend. 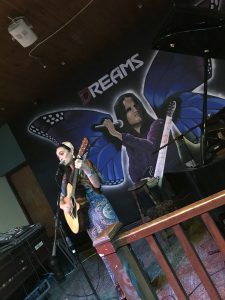 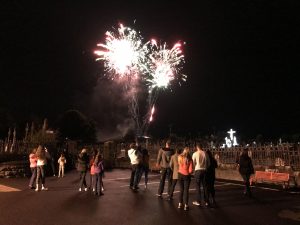 We feel honored to have been privileged to attend such a lovely event. What a very moving weekend, that was all about sharing love for the amazing talent we have lost.

HUGE CONGRATULATIONS and BIG THANKS to the organizing committee, the local people and artists who gave their free time to give life to this humble event within such a short period of time.

Best of luck to Dreams Fest which will hopefully become an annual event where fans from all over the world can gather to share their passion on such a special and meaningful date with the heartfelt Irish people, who, we believe, made Dolores proud last week!

See you next year, Dreams Fest! 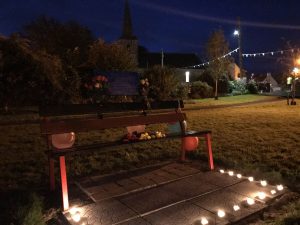