You are here: Cran World » The Cranberries » First dates of the second European leg announced

February 17, 2012  |  Comments Off on First dates of the second European leg announced  |  by Camille  |  The Cranberries

Grench promoter Gerard Drouot Productions confirmed a second show for Paris on November 25, 2012 as the concert of Grand Rex sold out today.
Tickets are already on sale on their website. 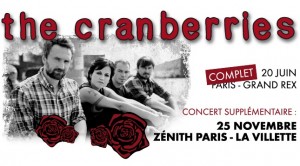 Also, as announced during the French promo tour of January 2012, the band should perform a big European Tour in the fall with bigger venues.