You are here: Cran World » Dolores O'Riordan » Could Dolores possibly be moving back to Ireland?

Could Dolores possibly be moving back to Ireland?

According to a recent article published in the Sunday World, Dolores O’ Riordan lost out on a mansion located in Malahide, North County Dublin.
Whether this information -which is surprising considering that Dolores has often explained she’s really enjoying her life in Canada- is real or not, one could imagine that The Cranberries singer would like to return full time to Ireland in order to get closer to her family after the loss of her father. 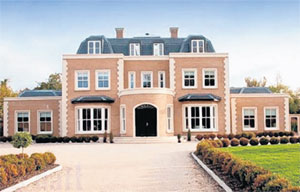 You probably all know that yesterday a My Fox article reported that Dolores was spotted in several Minneapolis bars drinking “both before and after the cancelled show” whereas there is absolutely no proof of this statement that was originally made by several disappointed and angry fans.

Information currently circulating about the band and Dolores on the web are to be ‘taken with a grain of salt’ especially as the band hasn’t released any statement yet on the last cancellations of US shows. Let’s thus be careful and wait for official news.

4 Responses to Could Dolores possibly be moving back to Ireland?