You are here: Cran World » The Cranberries » Official statement: shows from the “European Summer Tour” are cancelled/postponed!

Official statement: shows from the “European Summer Tour” are cancelled/postponed!

Gerard Drouot Productions and Pias France, respectively French concert promoter and record label, just released an official statement regarding the whole upcoming European leg of The Cranberries’ Roses Tour. Dolores explains that she cannot be on the road this summer for reasons she wants to keep private. She apologizes to all the fans and reassures them saying that The Cranberries will be at their best for the rescheduled shows. 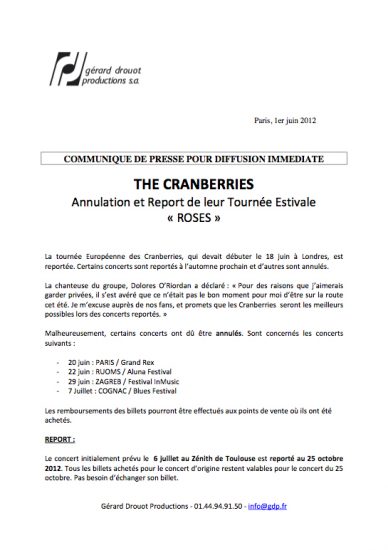 As for details regarding which concerts are postponed and which ones are cancelled, it seems that Toulouse (July 6) is postponed to October 25, whereas Paris (June 20), Ruoms (June 22), Zagreb (June 29) and Cognac (July 7) are cancelled! Refunds will be provided for all these shows except Toulouse where fans can keep their tickets for the reschedule date.

[EDIT:]
The same announcement was released via Cooking Vinyl a few minutes ago providing us with more details regarding other shows:

The show currently scheduled for Bratislava on 24/6 will also be rescheduled – we will advise the new date asap. We are also trying to reschedule the show in Beirut scheduled for 4/7 and further announcements will be made regarding this.

More dates to be announced shortly.

Thanks to G. who sent us the press release.

3 Responses to Official statement: shows from the “European Summer Tour” are cancelled/postponed!