Noel Hogan published yesterday on his public Facebook a message to announce his upcoming interview on Ireland’s SPIN South West Radio (94.7 FM) next July 13th for the Smart Arts series.
Tune in on SPIN web radio player at 2:15 pm to 2:35 pm on Friday, July 13th. 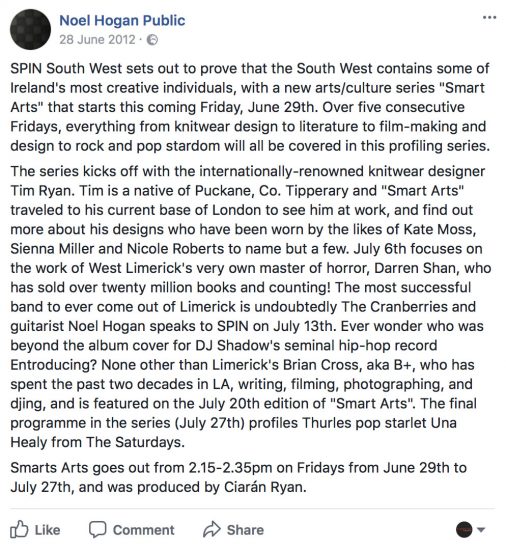 SPIN South West sets out to prove that the South West contains some of Ireland’s most creative individuals, with a new arts/culture series “Smart Arts” that starts this coming Friday, June 29th. Over five consecutive Fridays, everything from knitwear design to literature to film-making and design to rock and pop stardom will all be covered in this profiling series.
The Cranberries and guitarist Noel Hogan speaks to SPIN on July 27th. Ever wonder who was beyond the album cover for DJ Shadow’s seminal hip-hop record Entroducing? None other than Limerick’s Brian Cross, aka B+, who has spent the past two decades in LA, writing, filming, photographing, and djing, and is featured on the July 20th edition of “Smart Arts”. 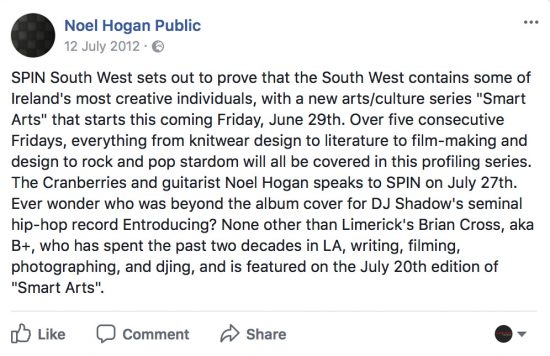 Posted in Mono Band, The Cranberries. Bookmark the permalink.

One Response to Noel Hogan in interview next month (UPDATED)