You are here: Cran World » The Cranberries » “Astral Projections” and “Roses” back on the setlist (UPDATED)

“Astral Projections” and “Roses” back on the setlist (UPDATED)

The Cranberries included back “Astral Projections” and “Roses”, two tracks from their lastest album on the Luxembourg show! That information was confirmed by one of the CW team member who attended the show. This is such great news as the Caen show recording is coming up in a few days. Let’s hope that the band will perform them on that night. 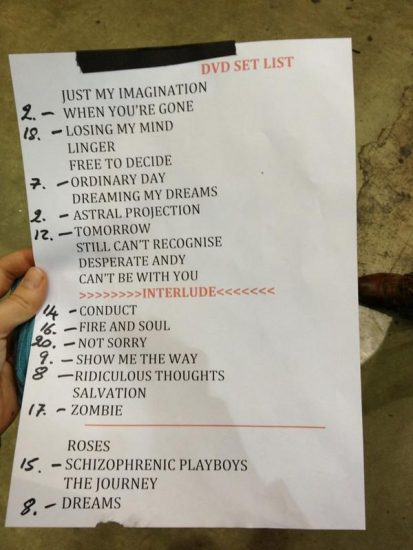 Even though there is a mysterious “DVD SET LIST” inscription at the top right of the setlist sheet, Camille -who attended the Luxembourg show- confirmed that there was no cameras at the venue. So no DVD release plan for the moment…

Posted in The Cranberries and tagged Tour. Bookmark the permalink.