Time is actually ticking out!!
Legendary Windmill Lane Studios in Dublin has issued an appeal to musicians who have worked there to collect their master tapes, among them some of The Cranberries recordings, or else they’ll be destroyed. 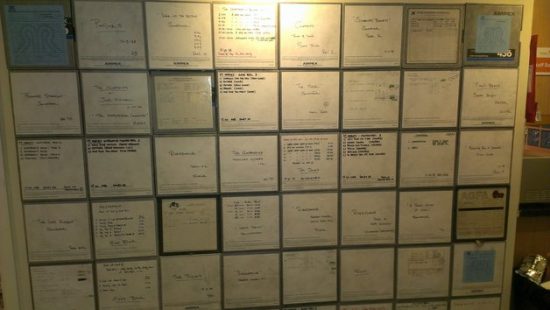 Some of the old tapes, including work by The Cranberries, on display at Windmill Lane Studios

“We’re appealing to any artists who’ve worked here using two-inch multitrack tapes to come in and reclaim them because we’re in the process of disposing of these tapes” Ian Brady of Pulse told RTÉ Ten. Windmill is now owned by Pulse Recording College.

The Cranberries recorded “Everybody Else Is Doing It, So Why Can’t We?“, “To The Faithful Departed“, “Wake Up and Smell The Coffee” and part of “Bury The Hatchet” at Windmill Lane studios. Who said everything?

Many of the tapes are either demos, master tape back-ups or discarded takes. Windmill Lane Studios will start to destroy the unclaimed tapes on May 7th.

Let’s hope that the band sees this and reclaims their tapes to save them for posterity! Wouldn’t it be nice to have some alternate takes or unreleased tracks just in time to celebrate “Everybody Else Is Doing It, So Why Can’t We?” 20th anniversary this year?

Posted in The Cranberries and tagged Windmill studios. Bookmark the permalink.