Dolores sang for the Pope tonight at “Concerto di Natale”

Earlier tonight was the recording of “Concerto di Natale” in Roma, Italy which will be broadcast on Italian TV on december 24th. This is the 5th time Dolores O’ Riordan is coming to this show. Her previous appearances were in 2001, 2002, 2005 and 2006.

“Silent Night”, “Away In A Manger” and “Happy Xmas, War Is Over” were already performed by Dolores at some other “Concerto di Natale” through the years, so we can’t wait to see what the 2013 versions sound like.

The new Pope, Pope Franciscus, was in the audience as he is spending his first Christmas in Vatican after being elected last March. Seeing a Pope at the show hasn’t happened in quite a long time as the last Pope, Pope Benedictus Sextus Decimus didn’t like the “Concerto di Natale” very much and we have to go back to Pope Ioannes Paulus II to see a Pope attending the event.
This time again, Dolores had a special audience with the Pontiff earlier this week. Let’s remember she met Pope Ioannes Paulus II in 2001 and 2002. 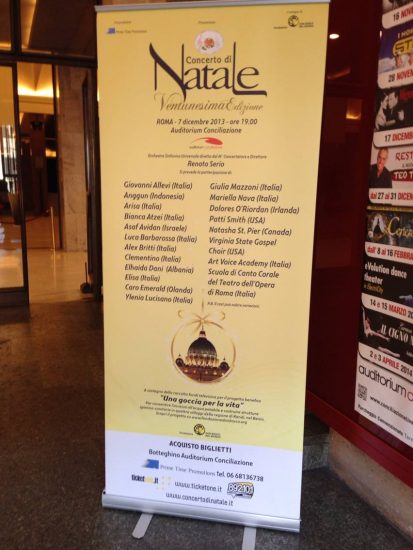