A late debriefing on last night’s second session of Blind Auditions.
Seems that the coaches are getting a little tougher as many more contestants left empty-handed on this second night of “The Voice of Ireland”. Six of them managed to have coaches turning their chair around though, among whom Pauric McLoughlin and Mariah Butler went to #TeamDolores. Have a look:

This week saw coaches fighting quite hard to convince candidates to pick them, especially for Mariah whose country vocals unanimously impressed the coaches (and the audience as well) with her rendition of Carrie Underwood’s “Before He Cheats”. Dolores and Jamelia had to argue over who would be the best coach for her and who knew country music better so to show the young girl who was worthy of being her coach.

Mariah’s choice (who had initially told her friend she would like to join Team Jamelia) shows that Dolores keeps on imposing herself as the “talents magnet” of the show.
It appears that our favorite singer is also growing in popularity among the audience as she’s about to get the highest share of likes with her team on the official website.
Let’s all keep on supporting #TeamDolores 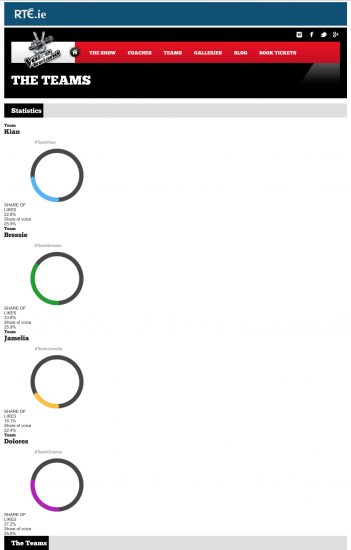 Last but not least, for those of you who’d like to attend some of the Live Shows in March & April, note that tickets are now on sale on The Helix website.

One Response to “The Voice of Ireland” – Episode #2