You are here: Cran World » The Cranberries » “Zombie” is back on the US iTunes charts

“Zombie” is back on the US iTunes charts

The biggest Cranberries hit, “Zombie”, is back on the iTunes charts… thanks to the US version of the popular talent show “The Voice”.
On the March 3 episode of “The Voice”, one of the contestants, Clarissa Serna, performed “Zombie” during the Blind Auditions.

According to the article entitled “The Voice recap: Clarissa Serna wows with Zombie performance” published by HollywoodLife.com, she “prompted an elusive four-chair turn with her haunting, original take on The Cranberries’ Zombie. Clarissa definitely made a bold song choice — and her risk paid off! Adam [Levine] said her deliciously ’90s performance made him nostalgic and it appeared he wasn’t the only one. Each one of the judges wanted Clarissa on their team, but she ultimately decided to go with her “Latina soul sister” Shakira“.

As a result, Clarissa Serna’s performance put “Zombie” back on the iTunes charts, with the peak of #33 according to our reader Ben. (Huge thanks to Ben for the heads up!)
An article entitled “The Voice’s Clarissa Serna drives iTunes sales for Zombie” published on Headlineplanet.com is talking about that: 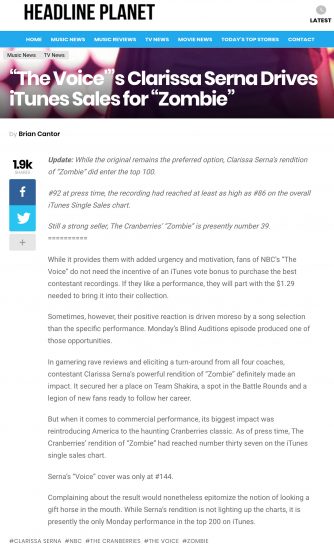 It’s impossible to watch Clarissa’s performance at “The Voice” as all videos uploaded on the internet are immediately removed for copyright reasons but you can listen to her studio version below: