August 12, 2014  |  Comments Off on More on O’Riordan collaboration with Eric Alexandrakis  |  by Camille  |  Dolores O'Riordan

As you might remember, Eric Alexandrakis recently stated that Dolores was involved in three music projects with him. Although it seems unlikely that these tracks will be included on Dolores’ third solo album, we’re learning a little more every week about these projects. Indeed, American record producer and musician Anthony J. Resta tweeted the following yesterday: 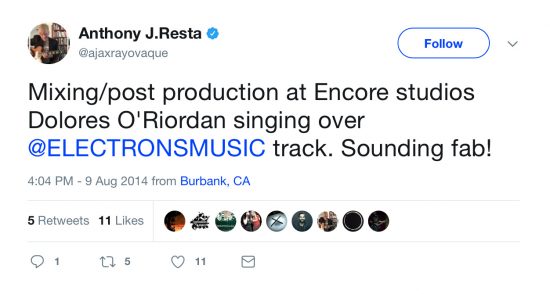 It is to be noted that ELECTRONS is one of Eric Alexandrakis’ projects along with Warren Cuccurullo, Steve Ferrone, Roger O’Donnell and Anthony J. Resta.
This could be one of the reasons why Dolores travelled several times to L.A. while recording “The Voice of Ireland” at the beggining of the year as this is were the Encore Studios are located.