Last Tuesday, September 2nd, was the official launch of “The Pigtown Fling”, a major musical project to develop a sustainable music industry in Limerick.
To celebrate this, a special event was organized at “The Blind Pig”, a bar restaurant located on Thomas Street in Limerick. For obvious reason this could not happen anywhere else! 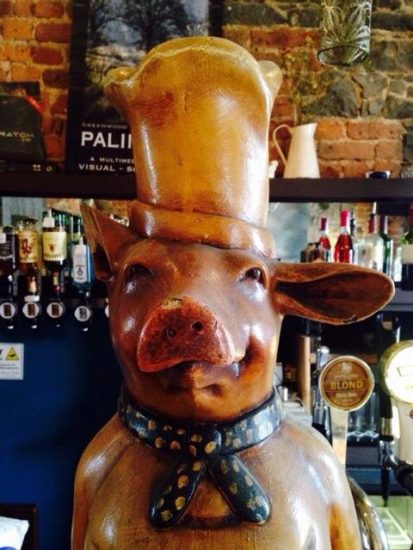 The chef Pig at the bar

An invitation was posted a few days before the event on The Pigtown Fling Facebook and everyone was welcome for a lunchtime: 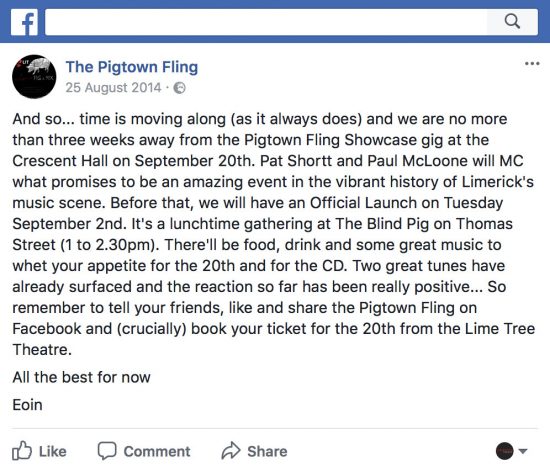 Some of the artists were there and things were quite simple: some food, drinks, a mic on its stand and a promotional poster for background. Noel Hogan (producer) as well as John Greenwood (creator and director) and Pr. Eoin Devereux spoke to the guests to explain what the concept of this album was all about. The rest of the time seemed like a long and pleasant meet and greet.

Below, some of the photos of the event. Some of you will discover Noel’s new look (well… not so new now), cool beard isn’t it. And there are 25 more photos posted on The Pigtown Fling Facebook. 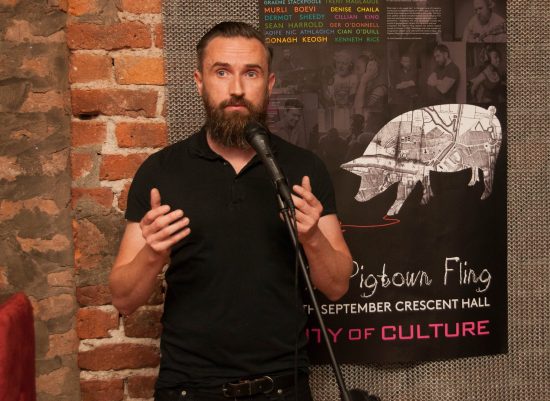 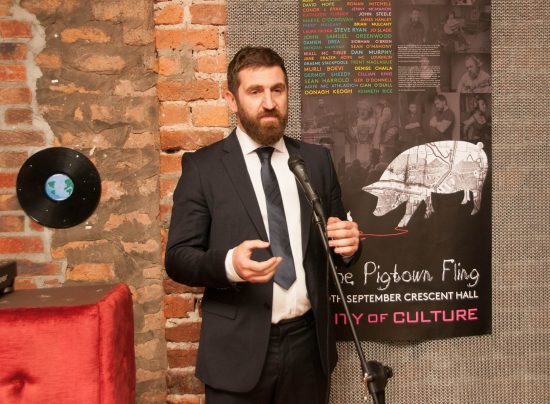 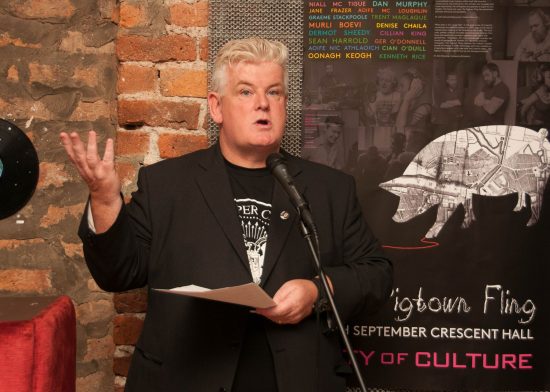 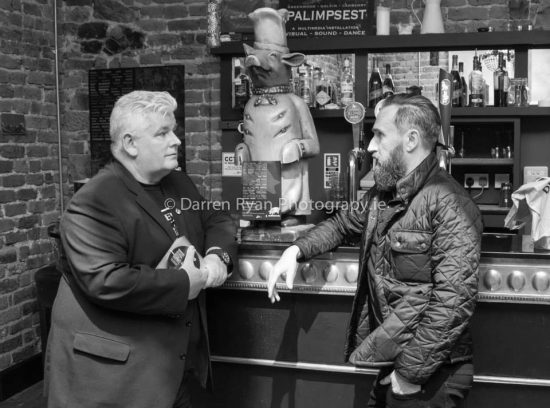 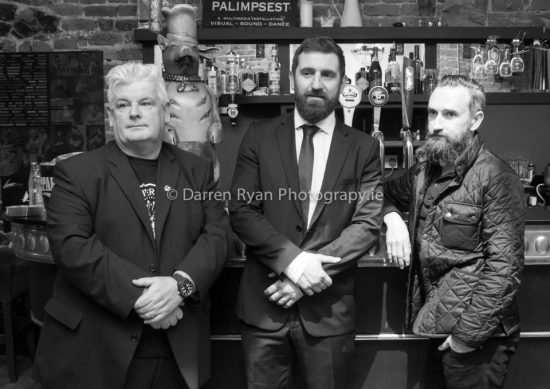 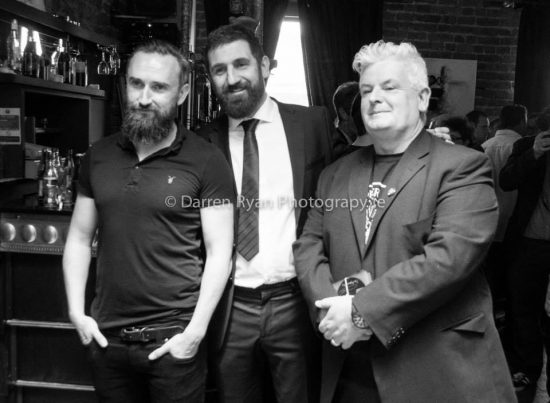 About the music itself, to this day we can discover 4 songs out of 17 that will appear on the coming CD. On August, 2 songs have officially surfaced “In My House” and “Hide & Creep”. Those 2 tunes airplayed on a few Irish radio (ClareFM, TippFM, 8 Radio…) and have been posted on the internet as well. (Soundcloud links no longer available)

The reaction so far has been positive. Since then a 3rd song called “Peppermint Love” and a 4th song called “February 13th” were posted last week and yesterday (respectively) on the internet on John Greenwood’s Soundcloud . (links no longer available)
All these 4 samples are gathered on a Promo CD whose Noel posted a picture on Tumblr on Sept. 2nd: 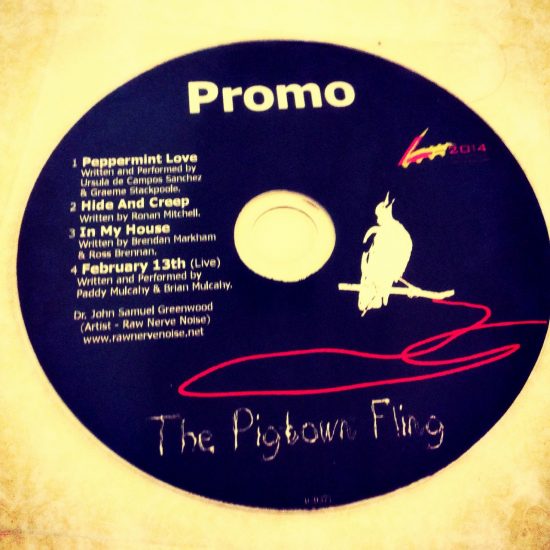 Media coverage seems quite good too even if quite local for now. Here are 2 different articles in the Limerick Leader, one published on August 30th entitled “Sounds of The Pigtown Fling” (a story according to Noel) and the other one published today Sept. 5th entitled “Musical legacy project brings together 47 great performers” (a report about the launch event at The Blind Pig bar). 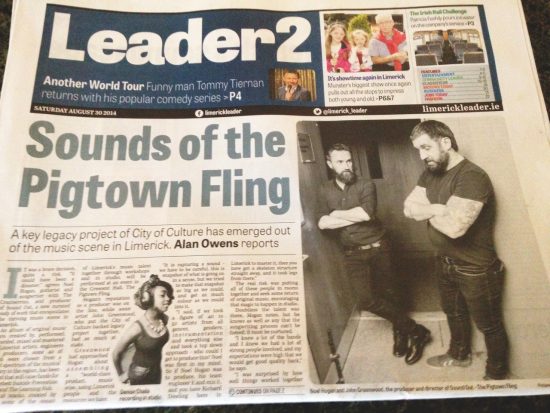 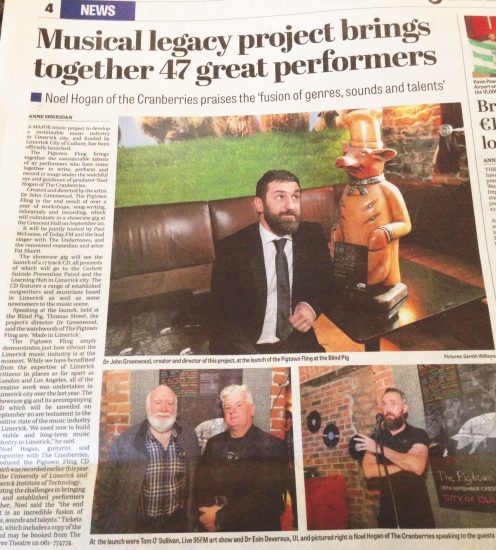 Dont’ forget this “over a year of workshops project” will culminate in a showcase gig at Crescent Hall in Limerick on September 20th.

One Response to “The Pigtown Fling” officially launched… and going well!