Quite an unexpected news this morning as we’re learning that Dolores has just been arrested by the garda following an “alleged air rage incident” on a flight from NYC to Shannon, Ireland.

The article entitled “Cranberries’ Dolores O’Riordan released into custody of mother after alleged air rage incident in which ‘garda was headbutted and air steward injured’” published by independent.ie describes the incident, explaining that Dolores refused to seat as the flight was landing and stamped on an attendant’s foot.
She then headbutted a garda before spitting in his face at the airport.

We shall probably wait for more information before we get to comment on this surprising event.
Let’s mainly hope our favorite singer is fine and not enduring tough times as it looked like she was lately…

The Independent’s article was updated with more details on the situation.
It seems Dolores has been released from garda custody and has now been hospitalized.
Journalists are awaiting comments from O’Riordan’s representatives…

More medias are now reporting about the incident and it’s only the beginning:
Limerick Post
The Irish Times
RTE News 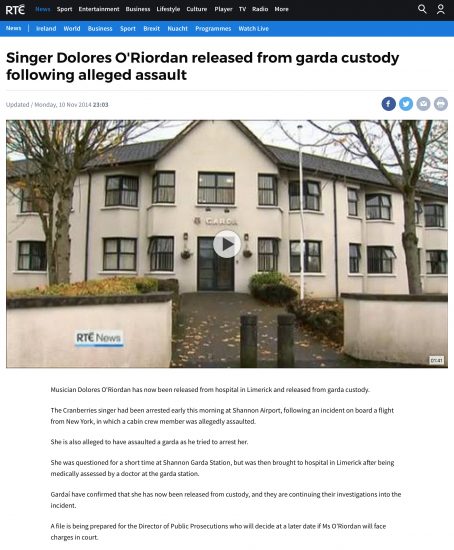