2 days ago the webzine 100% rock magazine published the complete interview Marco Mendoza gave in november and that first appeared in edited form in X-Press Magazine’s December 2 issue. X-Press Magazine is one of the most-circulated free street presses in Australia. 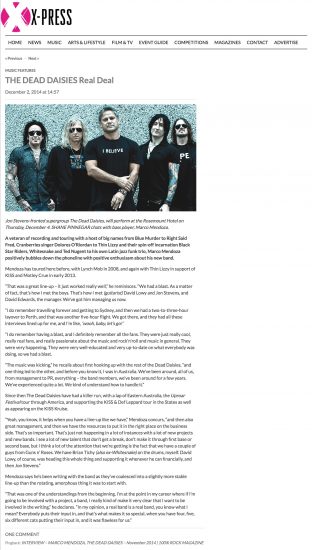 On the edited version the few words about Dolores were skipped (possibly because Marco was coming to Australia to play concerts with his band The Dead Daisies which has nothing to do with Dolores) but on the long & online version his words concerning Dolores O’ Riordan are revealed. Nothing really new that we didn’t know before but one thing: 6 tracks done in studio so far and more to come after his Australian concerts. Obviously this was before Dolores was arrested, now it will/should be after after!

Dolores O’Riordan from The Cranberries called me from New York, and so I flew up there. We were at the Electric Lady studios recording, we did six tracks.

I got home, and I’m going to continue that after I’m done with The Daisies, she’s trying to get an album together for a solo project. This’ll be my third album with her.