Composer, songwriter and producer Eric Alexandrakis who collaborated with Dolores few months ago has posted on Facebook a short clip of him playing guitar intro to some mysterious song.

Some of you may have read about this tune in the Irish press.

Attentive CranFans may remember that Irish press indeed reported about “La Fine” a new song recorded by Dolores and Eric. So this short clip could be a little piece of guitar part of “La Fine” (or not)… we just have to wait and see.

One of Eric’s Facebook friends wrote this: “It is! I’m one of Eric’s friends and can attest that it’s La Fine. It’s an amazing track, edgy, dark, killer. Perry Bamonte from The Cure is playing lead guitar, Steve Ferrone of Tom Petty & The Heartbreakers is playing drums, bass player Mark Egan on bass and Eric on everything else!“

The forementioned message by Eric’s friend on Facebook was later deleted so we guess this information was a little bit too confidential.

CONFIRMED, this is “La Fine”
In the comments on Eric Alexandrakis’ Facebook people kept asking if the video was “La Fine” and Eric replied: “I guess the cat’s out of the bag… yes… this is the tune” 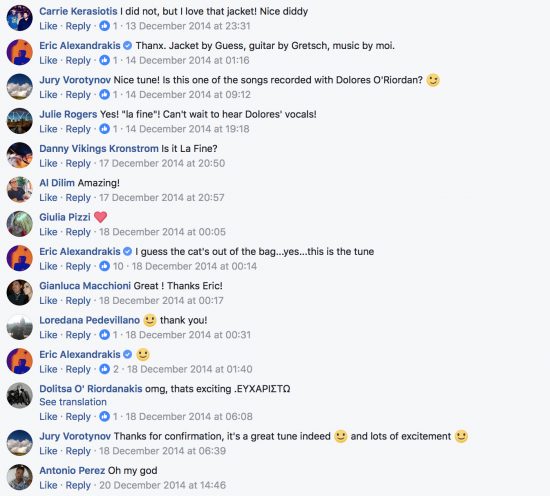