Eric Alexandrakis likes to tease his fans like nobody else. He definitely is a master at that and this will probably irritate a lot of people who just missed it. Today he decided to let anyone hear a complete demo version of La Fine on his periscope. As you probably know La Fine is one of the song featuring Dolores O’Riordan. For now Eric only periscoped an instrumental demo so to this day it is impossible to know if Dolores already recorded her vocals or not.
If you don’t know periscope yet it is an unlimited time video app. Users can live broadcast anything they like as long as they want and sometimes videos can be watched again as a replay.
Unfortunately La Fine has no replay.
The video Eric just broadcasted was black screen and we could only hear the audio. The song is approximately 4 minutes long. He broadcasted it twice as some people who missed the first broadcast asked for a repeat. Some of you managed to record it and emailed us the file but for copyright reasons and also to respect Eric and his collaborators work we can not broadcast it here. Sorry for that.
Ask Eric directly again, maybe he will accept another replay. It is worth it! 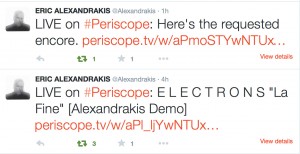