You are here: Cran World » The Cranberries » Bury The Hatchet double LIVE album at Concert Live?? 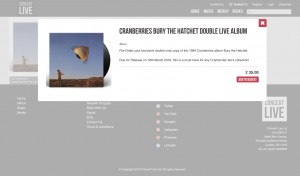 This probably is a mistake from Concert Live. Those guys often make mistakes, it is not the first time and it probably won’t be the last. For example see this past news where they announced unreleased recordings when it was not!

This 2LP version of Bury The Hatchet must probably be the recent Deluxe Edition 180 grams released last January in USA exclusively which would be now available for the first time in Europe. Otherwise if it really is a LIVE version of BTH this record would be completely unreleased & new.
Probability: 1% (or should I say 0% !!)

The word “live” was removed today! No more details if it is the 180 grams edition, but it sure is.