According to Billboard the debut album from alternative rock act D.A.R.K., featuring The Cranberries vocalist Dolores O’Riordan, former Smiths bassist Andy Rouke and Olé Koretsky is announced for May 27th on Cooking Vinyl in the USA. The London-based label is expanding its US operations with the opening of a full service label division.

On the other hand Rey Roldan, a music publicist based in New Jersey posted on Facebook last March 7th the following message:

And… we welcome DARK featuring DJ/Producer/Musician Olé Koretsky, Dolores O’Riordan (of The Cranberries) and Andy Rourke (of The Smiths) to the Reybee stable 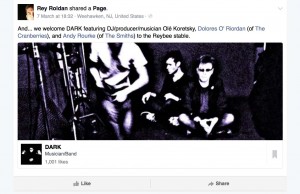 Well, it seems things are moving on the DARK side… but what about The Cranberries?
The DARK debut album is supposed to be released when The Cranberries will be about to tour in Europe.
Will Dolores be able to do both projects… probably YES!

Thanks to Sara who we are happy to welcome in our team!