You are here: Cran World » D.A.R.K. » D.A.R.K. first ever performances with Dolores announced!

A fan who lives in Dublin found out this morning on Ticketmaster.ie – an official ticket sales company – that D.A.R.K. will be performing on Monday May 16, 2016 at Whelan’s in Dublin! 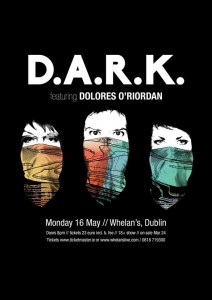 UPDATE AT 11:30 AM (CET)
Second date added in Paris at Divan du Monde on Friday May 20th as per French promoter website

These performances are the first ever concerts of D.A.R.K. announced since Dolores O’Riordan has joined the band. All these venues’ capacity is less than 500 people, which sounds quite exciting.

We believe some more shows should be announced in Europe around these ones today or during the week.

Many thanks to Johann Rosales who first shared the info for Dublin show.

4 Responses to D.A.R.K. first ever performances with Dolores announced!