You are here: Cran World » Dolores O'Riordan » Dolores to take part in a charity project against homelessness

Dolores to take part in a charity project against homelessness

April 3, 2016  |  Comments Off on Dolores to take part in a charity project against homelessness  |  by Axl  |  Dolores O'Riordan

An article published today on the Independent reveals that Dolores O’Riordan will be involved in a project called “Rock Against Homelessness” which is part of the “One For Ireland” campaign. This event is to alert on the overall number of homeless people in Ireland seriously increasing these last months and to raise €1M to fight youth homelessness throughout April. 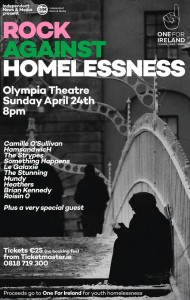 A concert will take place at the Olympia Theatre in Dublin on April 24 and a charity CD will be released in 3 weeks. Dolores is not on the list of the artists performing at the concert (or is she the very special guest?) but is to feature on the CD among other artists such as The Waterboys, Sinead O’Connor, The Chieftains, The Saw Doctors, Tommy Fleming, Camille O’Sullivan, Mundy and Hometown.

Thanks to A.P. for the tip!