If you’ve been following the D.A.R.K. news lately, you probably already know that “Science Agrees” release is to be postponed to August 19th, 2016.

As an obvious consequence, rumor grew that next announcement would concern a possible postponement of the band European tour that was due to take place from May 13th to May 26th. 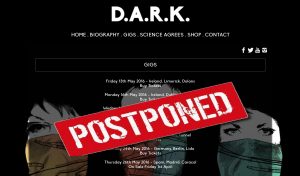 This rumor was just officially confirmed a moment ago as D.A.R.K. published the below message on their Facebook account :

To all our fans we are so sorry to announce that we have to postpone our forthcoming tour until September due to the last minute unavailability of our lead guitarist and the deferral of the release of our debut album until late August. All tickets already purchased will be valid for the rescheduled shows in September details of which will be announced after the weekend. For those of you who cannot make it to our rescheduled shows full refunds will be given. We sincerely regret this and hope to see you at our shows in September.

The rescheduled dates are not known at the moment but should be in a couple of days.

Quite a disappointing news for fans – especially those who had booked flights, hotels and tickets to be among the firsts to discover Dolores O’Riordan’s new project – but somehow unsurprising.

We will keep you updated on this postponement as soon as we get some more news.