You are here: Cran World » D.A.R.K. » New extract from “Science Agrees” on Shazam

A new teaser of the D.A.R.K.’s debut album appeared online today as Shazam released 30 seconds of the track “The Moon”. 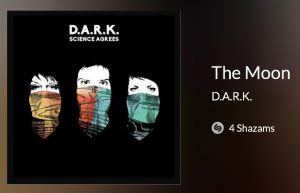 It is the second time fans get to hear some pieces of the album on Shazam. Indeed an extract of “Steal You Away” was previously unveiled on the platform a couple of weeks ago.
This time, fans can enjoy a preview of Olé Koretsky and Andy Rourke’s favorite track of the album, as they mentioned in the Way Out Radio interview.