The English magazine “Classic Pop” published in their current August/September issue a brand new interview with D.A.R.K., the first one featuring Dolores. 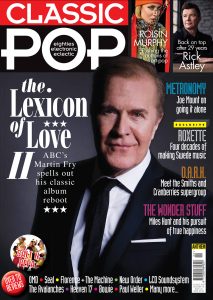 Even if this interview is totally focused on D.A.R.K., one part retains the reader’s attention more than the others as “Classic Pop” is the very first media to officially confirm what Cranberries World team member Jury exposed/guessed a few months ago:

THE CRANBERRIES ARE/WERE RECORDING AN ALBUM WITH THE IRISH CHAMBER ORCHESTRA.

DOLORES: (…) at the time I felt like it (Roses) was going to be the last album, but the years go by, things happen in your life and you end up together.

A cranberries ‘greatest hits’ album is due to be recorded soon with the Irish Chamber Orchestra and that project co-exists with the debut album by D.A.R.K.

Dolores and the boys probably had not recorded anything when this interview was done, and to this day it is unclear whether the lads totally finished all their tracks/parts nor if Dolores even started recording hers. Anyway, this is definitely good news for all The Cranberries fans.

The rest of the interview, the main part, is still very interesting as it’s the very first time we get to read Dolores’ point of view about D.A.R.K.’s project:

DOLORES: It’s a very different way of working to how The Cranberries operate (…) This project is completely different than anything else I have worked on and I’d have to call it unique. It wasn’t contrived in any way. It just kinda happened and became the sound that it was.

OLE KORETSKY: Apart from the Seventies wannabee purists, 90% of bands these days are using programs. Everybody is playing to a click track! The Cranberries are one of the bands who don’t do that. Them, AC/DC, and The Rolling Stones are just rocking out! It’s a very different vibe.

Dolores also talks about the tough days, the time she spent in a psychiatric hospital, the help received from doctors and family and the fact she is feeling better now. Some parts of “Science Agrees” were recorded during this turmoil. Working on D.A.R.K.’s songs was a sort of therapy.

“DOLORES: I was manic when I was recording Gunfight”.

Read the whole interview by clicking this link.

Posted in D.A.R.K., The Cranberries. Bookmark the permalink.