The Cranberries concerts in Cancún rescheduled to February 2017

Following the cancellation of The Cranberries concert in Landerneau, France, due to Dolores’ back problem which prevented her to perform, Palace Resorts just confirmed a moment ago that the Mexican dates due to take place August 26, 27 and 28 will be rescheduled to February 10, 11 & 12 2017 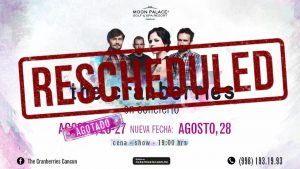 UPDATE THE CRANBERRIES: Due to circumstances of force majeure, Palace Resorts regrettably confirms three upcoming performances by The Cranberries scheduled to take place at Moon Palace Golf & Spa Resort in Cancun on August 26, 27 and 28, 2016, have been rescheduled. The unexpected announcement is due to the unfortunate medical condition of an injury affecting Dolores O’Riordan, the band’s lead singer.

After several weeks of experiencing severe back pain caused by a bulging disc; sore and limited relief from medications prevented Dolores to go on stage, and the band was forced to cancel their last concert in France. “By now she’s simply not well enough and in too much pain to be able to perform”; said Dr. Masterson of Limerick University.

Regaining her health and ability to perform has been a priority for Dolores in the last few days. Unfortunately, the severe pain and swelling have not allowed her to recover and Dolores has been prescribed with complete rest.

Performances from The Cranberries at Moon Palace Arena will now take place on February 10, 11 and 12, 2017.

We sincerely apologize for this unavoidable inconvenience and disappointment and send our best wishes to Dolores O’Riordan so she may recover fully. We also thank the fans and followers of The Cranberries for your understanding and solidarity.

We wish Dolores a prompt recovery.