Back in April this year, Dolores O’ Riordan and Andy Rourke gave an interview for The Talkhouse supposed to be published in May. A few pictures were published on this post. As the album was postponed, the publication was delayed as well… until today as the website TheTalkouse.com made it available online.

It is a 28 min long audio interview podcast which also includes the official world premiere of the song “High Fashion”. Sure most of the fans have already heard the song as the album previously appeared/leaked on streaming platforms last August 19th before it was taken down the following day!!! 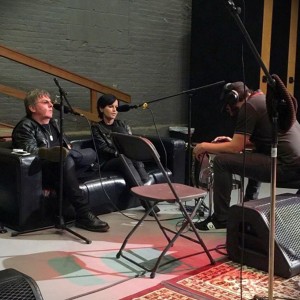 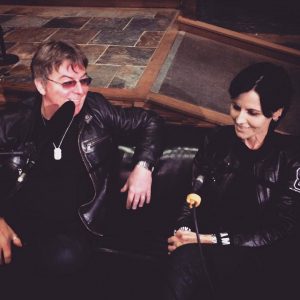 Naturally, no one knows more about music than musicians. On Talkhouse podcasts, smart, notable artists from the world of music talk candidly to each other about their work. It’s the kind of conversation you won’t hear anywhere else. The Talkhouse podcasts are an extension of the fascinating written dialogues that happen every day on the Talkhouse.

On this week’s episode of the Talkhouse Music Podcast, Andy Rourke of the Smiths and Dolores O’Riordan of the Cranberries sit down to discuss their new supergroup, D.A.R.K, and we give their song, “High Fashion,” its world premiere.

The new bandmates and old friends talk Dolores’ teenage Smiths fandom, Stephen Street (who helmed production duties on iconic records for both groups), initial reaction from their legendary bands’ diehard fans to the new project, and getting pelted onstage at festivals back in the day by a half-eaten apple and a packet of sausages adorned with the note “Meat is Murder.” Take a listen and subscribe now on iTunes or Stitcher to stay in the loop on future Talkhouse Podcasts.
— Elia Einhorn, Talkhouse Podcast producer and engineer

NB: If you can’t contain your excitement and need to hear “High Fashion” before the talk, skip ahead to 4:30. We don’t blame you.