The Cranberries in concert in Lima, Perú… now (almost) official

For those who were expecting nothing more to happen for The Cranberries or D.A.R.K. late 2016 following all the concerts and tour cancellations, you were wrong!
Dolores O’Riordan Spain, just found out a great new clue which (almost) comes as an official confirmation that The Cranberries will indeed play in Lima, Perú on December 17, 2016 at Festival Vivo X El Rock 8 in just 3 months from now!
Indeed, the rock band Papa Roach just published on their Instagram account the festival line-up featuring The Cranberries. What was a possible mistake published by Bandsintown a few days ago turns out to be a spoiler. 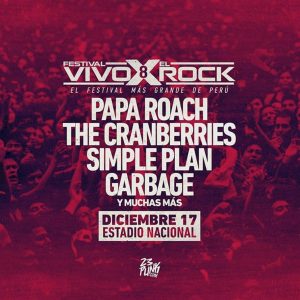 Will there be more South/North American dates to come? What about the D.A.R.K. shows Andy Rourke was hoping to add in North America?
Time will tell…

Thanks to DORSpain for finding this.

3 Responses to The Cranberries in concert in Lima, Perú… now (almost) official