Customers who ordered signed “Science Agrees” LP’s or CD’s at Pledge Music received a shipping update email today to let them know their orders were delayed. It seems the albums were damaged in transit around the world to get all band members to sign them. Here’s below the official statement:

This is an update on the Signed D.A.R.K. LPs and CDs.

Due to unforeseen circumstances, the signing of the albums hasn’t been possible with the band all in one location. Subsequently, the stock had to be shipped to individual members all over the world – in both Ireland and the USA – and once the stock arrived at the fulfilment warehouse in the UK, it was discovered to have become damaged in transit and not something any of PledgeMusic, the band’s management, or the record label involved felt happy shipping to customers.

We are currently in the process of getting this rectified. There is a quicker turnaround on getting replacement signed CDs and as such these should begin shipping to customers asap. Unfortunately, the signed vinyl will take longer, but there will be an update when we know accurate delivery times.

We apologise for this delay, but we know no-one would have been happy to receive the damaged albums. 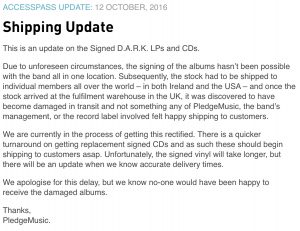 However one customer already reported receiving his signed CD today, see his photo below.
Thanks to Jim Moore 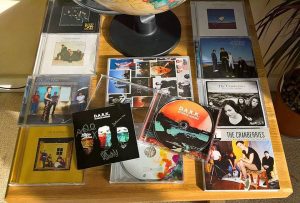