You are here: Cran World » The Cranberries » Bad news from French fans…

Taratata just announced The Cranberries would not perform on their show with London Grammar, Camille & Féfé next Tuesday.

Fans who had reveived their confirmation email earlier this day were just sent a new one mentionning that the band’s performance had been cancelled. No reason given! Tickets remain valid to attend tv show recording on that day though.

Let’s hope everyone’s ok and that the upcoming European tour won’t be affected as well. 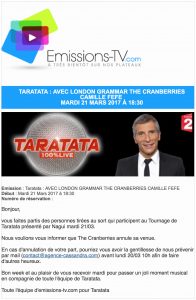