You are here: Cran World » The Cranberries » “Everybody Else…” to be reissued on 180g vinyl (2 UPDATES)

Crazy times!! After the translucent red reissue available exclusively on Barnes & Noble, here comes a second reissue of EEIDISWCW on vinyl, this time it will be a 180 grams standard color (black) vinyl. Release date is the same as the B&N one (May 26) but this really is a different pressing:

You can preorder now on AnalogSpark.com
Price: $25

Thanks to Cranberryesque for the info. 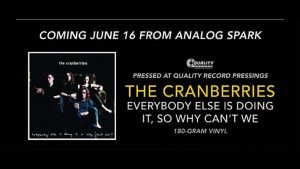 UPDATE JUN.17:
New new release date announced: June 30, 2017
Just like the red vinyl reissue, this other reissue has been delayed as well and both vinyls are now expected for the same date.