A few hours ago the 4 members of The Cranberries were on Irish Radio RTE 2fm on “The Nicky Byrne Show with Jenny Greene” show. The interview was prerecorded yesterday during their press day in Dublin and broadcast around noon today. Just before the broadcast, Nicky Byrne posted a photo with the whole band on his Twitter account. 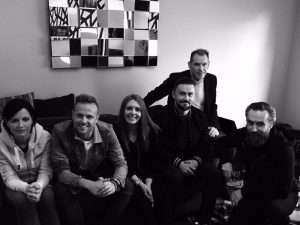 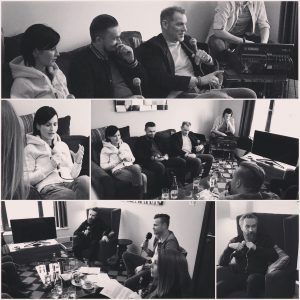 The interview is about 15 minutes long and starts with questions about The Bachelorette, the music industry being different today, the early years when sending demo tapes and receiving record companies letters/answers, the day when and where Zombie was written.

Then one of the hosts asks about Linger.
Dolores: “it’s about first kiss and how the guy broke my heart”
“Does he know the song’s about him?” replies one of the host
Dolores: “I actually got a letter from him about 10 years later, he just said, you know I’m sorry”

About Irish shows coming up soon, are they nervous or is it exciting.
Noel: “A bit of both, you’re far more aware of it, a lot of family out there and at the same time you can’t wait to do it because we do this a lot all over the world and a lot of people aren’t aware of that so it’s nice to kind of come home, we don’t do it that often so it’s always special when we do it”

About more Irish dates.
Noel: “We never say never”
Dolores: “but after this tour it’s the U.S. in September and then they want us to go in South America“

About the I.C.O. and the NYE gig and if they had already worked with an orchestra before.
Dolores: “Actually Linger, the original recording, there was a quartet used on that”

About the upcoming shows and the kind of songs they’re gonna be performing.
Noel: “Mainly the album that’s coming out, they’re kind of a semi acoustic with the quartet, a lot of the songs in this album I guess were singles over the years so we’ll be doing those. There’s some new songs written for this album … it may change a bit as we go along then add in and take out songs as the weeks go by but there’s enough to cover… the set is an hour and a half, an hour and twenty minutes.”

About another studio album.
Dolores: “Noel writes more on the road cos he has more time so he sends me bits and pieces so it’s good going on tour cos we get to write for a bit.”

About D.A.R.K.
Dolores: “…the material is very interesting, kind of electronic and it’s also very ambiant, very different to what i’ve done before. Olé is opening up for us on his own but then probably when we swing over to America Andy will probably come on stage and do a few gigs with him. “ 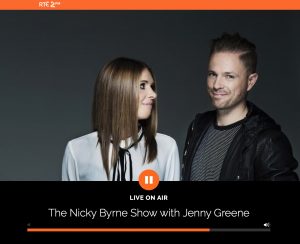 Special thanks to the fabulous Jackie Hogan for letting fans know about this broadcast just on time.
You Rock!