BREAKING NEWS: Following Wednesday announcement by French Promoter -GDP- that the May/June shows will in fact NOT be rescheduled, the Swiss promoter -Opus One- just emailed customers who had bought tickets for the show in Genève to let them know that “all dates due to take place between May 20th and August 30th are cancelled“. Here below a screen capture of their email in French: 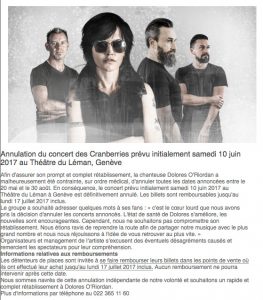 Opus One then quotes the band as Ticketmaster.nl did earlier:

“We have really been thrilled to be back on the road and sharing our music with everyone and it’s with a heavy heart that we have had to pull these shows. Dolores is making good progress though we understandably do not want to jeopardise a full recovery. “

We can’t help but being saddened by the news, but as the band mentioned late May, Dolores health is paramount. Let’s note the band has not made any official statement yet regarding the situation.

UPDATE 7:00pm (UTC):
A fan sent an email through the official website a moment ago to be confirmed the announcement from Swiss concert promoter and was told pretty much the opposite as: “all shows are still going ahead apart from those that were cancelled a couple of weeks ago“.
Here’s a screen capture of his email below:

Whatever is going on, one can really question communication between management and promoters here…
Could the webmaster of the band’s official website possibly not be aware of these cancellations?
And could a local promoter make such an announcement up?
The situation is quite confusing…

We strongly advise fans to wait for official announcement from the band’s official website and socials. Also, if ever you receive an email from a promoter/ticket retailer we could have missed, please feel free to let us know so that we can keep everyone updated.

UPDATE June 17, 9:00pm (UTC):
The band just released an official statement on their Facebook page to confirm full cancellation of the European shows due to take place between May 22nd to August 30th. Let’s note that the US tour starting on September 11th will go ahead as planned.

Most regrettably, Dolores O’Riordan has been instructed by her doctors to not resume touring as planned to help facilitate a full recovery to an ongoing back problem that she is currently receiving treatment for.

The Cranberries commented “It is with a heavy heart that we have had to pull these shows. Dolores is making good progress however we understandably don’t want to jeopardise a full recovery. We have really been thrilled to be back on the road and sharing our music with everyone, and so look forward to seeing everyone as soon as possible”.

All the band’s shows from 30th May to 30th August have been cancelled.
Where The Cranberries were playing a headline show, this event will now not take place and ticket holders should seek refund at point of purchase. These are marked with a (*) on the list below. The Festival Appearances that the band were due to undertake have also been cancelled, these events will go ahead without The Cranberries present.

The previously cancelled UK dates in May will also not be rescheduled; ticket holders should seek refund at point of purchase.

The North American tour dates starting 11 September will go ahead as planned.