You are here: Cran World » The Cranberries » “Love Letters From Limerick” featuring a new track by Fergal

“Love Letters From Limerick” featuring a new track by Fergal 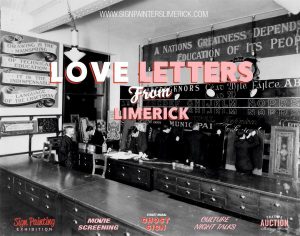 “Love Letters from Limerick” is a short film (approximately 4 min. long) which was shown at the LIT presentation last Friday where the “Everybody Else Is Doing It, So Why Can’t We?” giant sign was donated and unveiled. It showcases the creation of this inspiring project.

And as Tom Collins says about the sign: “I love where it is now, it’s on a great blue wall, it looks like a big cloud on a blue wall, it’s a happy cloud”

Everybody Else is Doing It So Why Can’t We?
Texas based sign painter and illustrator Sean Starr collaborated with Limerick sign painter Tom Collins to create a 10ft high 15ft wide hand painted sign placing the title of The Cranberries debut album centre stage on a large cloud. This video showcases the creation of the sign and its installation in a permanent home where it’s elevating message can inspire future generations. Featuring a new track by Fergal Lawler of The Cranberries.