Erratum concerning the rare black and white photo tagged “Dolores in Limerick 2000” on the website akostra.livejournal.com and reported on CW 3 days ago.

A fan just sent us the picture below off a german magazine called “Petra” dated from 1999. Same photo session, almost the same pose. The session then can’t be from the year 2000 and was probably from early 1999. 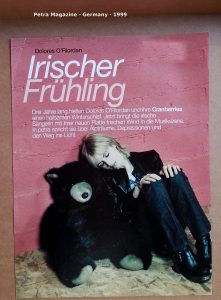